How a hacked Eames Shell Chair, the world’s first mousepad, and a one-off keyboard console set the stage for the personal computer revolution.

In 1968, the researcher Douglas Engelbart debuted what would become the computer of the future at the Joint Computer Conference in San Francisco, California. Based in part on a dream, Engelbart created a personal computer not all that different than what we use today. It had a screen and keyboard, capabilities like hypertext, WYSIWYG word processing, dynamic file linking, videoconferencing, the first-ever mouse, and even a sort of proto-PowerPoint. But for all the horsepower and invention in the machine, which had its own large computational hub 40 miles away, it wasn’t the programming that made history. It was the interface.

Remember that in 1968, computers were massive punch-card-fed mainframes with intricate circuitry—think the Apollo 11 moon mission—the kinds of machines used primarily to do complex calculations for the government, scientists, the military, and corporations. Computers were for institutions, not for people.

Engelbart, Director of the Augmentation Research Center at Stanford Research Institute (SRI), and his oN-Line System—or NLS, for short—offered a new vision of how man and machine might interact. The computer’s screen interface itself provided a revelatory new way to visually organize information, and included a real stroke of genius: the first mouse. Suddenly, a person could engage with computers by using her hands and fingers to directly manipulate text and graphics rendered on a screen, an approach light years beyond the dissociative system common at the time. It was an era-defining event—the 1,000-plus attendees at what would be dubbed “the Mother of all Demos” gave the man a standing ovation—because Engelbart had begun to bridge the chasm between biology and circuitry, creating real-time interactivity based on human movement. And he unleashed his new vision of man and machine on a hacked-together Eames Shell Chair, a one-off console designed by researchers at Herman Miller, and an improvised Naugahyde patch functioning as the world’s first mouse pad. 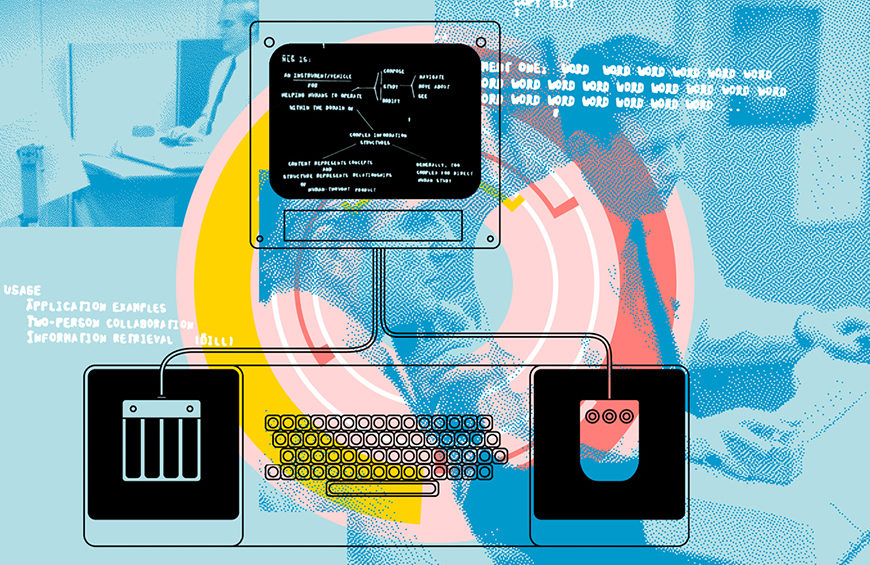 Kelley had a significant influence on the computer setup itself as well. In SRI’s initial design, the monitor and keyboard were one unit; Kelley’s feedback led them to design them as separate pieces. The computer as we know it had begun to take shape.

Ultimately, the separation of screen and console from the machine’s computational guts allowed Kelley to shift the design focus away from accommodating all the hardware and toward the user’s ultimate comfort. If Engelbart was advancing the mind through technology—“bootstrapping,” as he called it—Herman Miller was promoting its own kind of augmented body intelligence through furniture. The Demo was one of the first times that ground-up design research was used to create sympathetic furnishings for computer interaction (little surprise that SRI was such a willing partner—it installed an Action Office of its own in the run-up to the Demo).

Onstage, in San Francisco, the Eames Shell Chair modified for NLS provided a control seat for a new form of networked mind. If Charles and Ray Eames were interested in using technology to facilitate a better sit, Kelley and Engelbart devised how a better sit might catalyze the march of technology. By using the language of Action Office, Kelley’s work on the console chair and mousepad allowed NLS to evolve from technological curiosity into the centerpiece of a living, dynamic work setting.

The NLS was a precursor to much of the computing technology and interactivity that would emerge—just as Action Office established a similar legacy in office design. The SRI and Herman Miller teams developed innovations through a keen insight into people’s experiential interactions with their machines and spaces. Though the keyboard console and Eames chair remained one-off prototypes, the SRI and Herman Miller collaboration generated a preview of the way we work today.

Article from Herman Miller WHY http://www.hermanmiller.com/wh...